Surrey Athletic Officials were out in force on Friday 26th March for the Olympic Marathon and 20k Race Walk Trials at the glorious Kew Gardens. 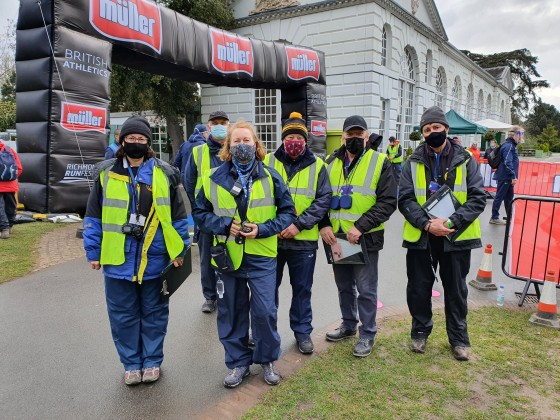 While there was some drop out of competing athletes for all sorts of reasons, the Officials just could not wait to be back ‘working’. Everyone took a covid test (LFT) within 48 hours of the event, and the athletes were only allowed a 'plus one' who had to control their water station during the races.

The hopes were that this flat but beautiful course would provide a great basis for some super times, but what the TV presenters, who must have been inside warm buildings didn’t seem to fathom, was that it was actually quite windy – even to the extent of blowing away Donna’s tent which was put up under a huge Yew tree!

A great morning of athleticism, with Callum Wilkinson taking a clear lead and great finish in the 20k Walk in 82:47. Sadly none of the 20k Race Walkers quite reached their Olympic goals (this time) although there were some great PBs. However, within the 20k was a 10k Race Walk for three younger athletes, with the first male and first female potentially qualifying for the GB team for the European Race Walking Cup. 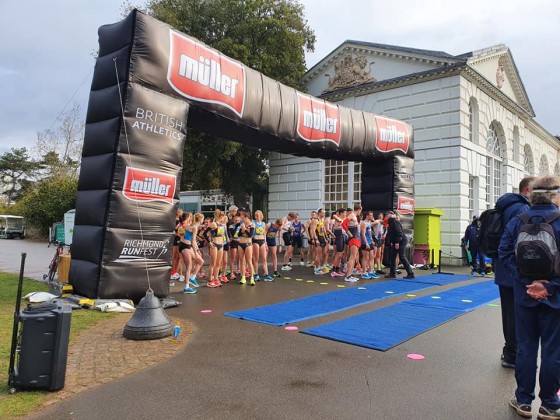 The weather was a little calmer by 8am and the Marathon started with 36 athletes plus pacemakers. One lap of just over 1.6km was following by 12 x 3.33km laps, and it wasn’t until about 20k that you could spot the lead 10 men pulling away from the lead group of women. Christopher Thompson, Benjamin Connor, Mohamud Aadan and Dewi Griffiths ran very much as a pack, and were constantly reminded to ‘work with the wind’. The front 3 men started pulling away from Dewi at about 35km, but in the last few laps, it was evident that Chris Thompson really was going to take a spectacular first place, and ultimately finished in 2:10:52 - the Olympic Qualifier being 2:11:30.

For the Women to get to Tokyo, 2:29:30 was the goal, and Stephanie Davis ran a fantastic 2:27:16. Sadly, second place was just over 30 seconds after the qualifying time but let’s keep our fingers crossed for Natasha Cockram!