I hope that you and your families are keeping safe and well and that you had a happy and peaceful Easter. With the lighter evenings and the (sometimes) warmer weather it certainly is starting to feel like there is light at the end of the long Covid-19 tunnel.

After a year of disruption training was able to resume for most groups from last Monday. I think turnout was good for the senior groups and I imagine that the junior groups were well attended too.

Here is the Wednesday evening senior group rediscovering the joys of running in Priory Park.

The Club AGM - a date for your diaries

The AGM will be held on Monday 26th April. Please add this date to your diaries. More details are on the Noticeboard. If you have not received a formal notification (email) please contact the club secretary

We still have no candidates for the post of Club Chair which will become vacant at the AGM. There is an updated description of the Chair role here.  Malcolm is waiting to discuss the role with anyone who thinks that they might be interested in taking on this position. It is possible for the club to have co-chairs if you would be willing to share the role with others.

We will also be awarding senior trophies to the 2020 Club Champions and to other competition winners.

The discount code for April will be shared in the email version of this newsletter. Don't forget that we are not allowed to share this outside of the club.

Isla Kinniburg and her friend Nicole (sorry, I don't have her surname) each ran 50K over 5 weeks from 1st March to raise money for GreenPeace. Their target was to raise £150 and at the time of writing they have raised a fantastic £578. Well done Isla and Nicole! If you would like to contribute to their fundraising  a link to their Just Giving page will be included in the email version of the newsletter.

Gavin Lawrence and Dave Mills will be in touch directly with their groups with arrangements for the resumption of training.

Dates for Your Diary

Surrey Quadkids team event on Wednesday 23 June 5:30 at Guildford for school years 5 and 6.

The athletics leagues are looking to hold events over the summer and the following dates have been confirmed so far:

RPAC Athletes Back With a Vengeance

RPAC athletes returned to competition with a spring in their step and racked up a host of PBs and two new club records.

Kate Knight completed her 69th marathon, finishing in 6:51:19, just 3½ months after having had spinal surgery. Amazing Kate!  Kate says that she is looking forward to completing her 70th marathon on 17th April.

Here is Ginevra on her way to her new club record 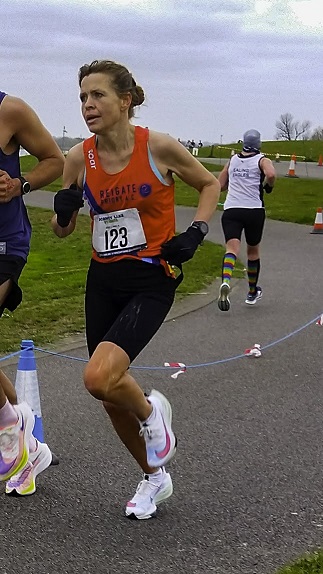 ..and here is Kate having completed her 69th Marathon 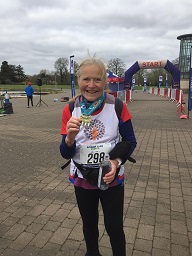 Also on Saturday Frank and Gillian O'Regan both notched up new 10k PBs at the Run Through Kempton Park event, finishing in 36:47 and 43:29 respectively. Well done Team O'Regan!

At the same event Doug Kington scored a new PB in the Half Marathon distance by finishing in 1:39:30. Brilliant run Doug!

Today (5th April) Eloise Bull , George Roux and Steve Cheesman all took part in the PB5K at Ardingly Showground. They finished in 18:43, 15:57 and 17:51 respectively. Well done to you all!

Just a reminder that if you are taking part in a race that could form part of this year's Club championships you need to include your affiliation to RPAC for it to appear correctly on Power of 10.

Stay safe everybody. Please let us know if there is anything you'd like to see in the newsletter.