Hello everyone I hope you and your families are all keeping well. I look forward to seeing many of you on Thursday evening for our Summer Barbecue & Relay Races.

Our Summer Barbecue will be held this Thursday.

Relay races will start soon after 7pm. If you want to take part just turn up in your running kit, teams will be selected on the night and will be mixed between junior and senior members.

Food will be served from 7:30 pm. If you are able to help our catering team by providing a salad of some sort please let us know by emailing

Thank you to everyone who played any part in organising this year's Summer 10K it couldn't have happened without you. It was great to see so many club members helping set up and breakdown the course, marshal, manning the water stations, etc. - we covered the whole range from long standing club members to brand new members, from very young members to the not so young...and a even a few non-members. Hopefully all of your names appear on the volunteers section on the club homepage; please let us know if you have been missed from the list.

A few people deserve special thanks in my opinion. Firstly, Race Director Chris Veale who, although sadly no longer a club member, agreed to carry on in post until after the race; secondly, Moray Carey for his tireless discussions with the Council to obtain a green light for the event and finally, Usha Stevens for filling all the volunteer positions even when people had to self-isolate at the last minute. These thanks are based on my personal observations so I apologise in advance if I have missed anyone who deserves a special mention.

Although numbers were well down on normal we still had 198 finishers and I think, 247 entrants. Despite the very hot conditions there were some excellent results and RPAC members were well placed with Adam Evans finishing in overall second place a few seconds ahead of Ewan McKay in third.

Pictures from the evening are here. Full results for the RPAC participants are in the Senior Results section.

Give us your results please

If you run in an event, do please let us know your results by emailing

. If possible please can you submit them by Sunday evening at the latest as this allows us to meet the deadline for the Surrey Mirror sports pages.

A small but competitive RPAC team turned out for the second match of this year’s Ebbisham League at Sutton on Saturday. With pretty much every athlete recording one or more PBs we won our division on the day.

Milo Seals led the way with PBs in all three of his events. Euan Willis achieved a big PB in the 1500m. Max Orchard achieved PBs in the 200m and 75m hurdles, whilst Michael Maguire did likewise in the 100m and long jump. With Michael and Max we have two of the top ten U13 long jumpers in the country now.Buddy Kedgley attained a PB in the 200m and Louis Gibson in the long jump and 100m. Justin Collins achieved a PB in the 100m and Sam Stapley in the 300m, as well as comfortably winning the 800m, whilst Isaac Beckett scored a PB in the 800m. In the non scoring U11 James Beatty won his 600m, Evan Moffat had a great debut coming second in the 75m, 150m and long Jump, whilst Hayden Clarke competed strongly in the 75m and 600m. One of the highlights of the day was coming second in the U13 4x 100m relay to a strong Wimbledon team.

A wet Sunday with some torrential downpours couldn't stop some great performances from Reigate Priory's junior athletes in our combined team with Holland Sports AC.

Well done to all our athletes and parents for making the perilous return trip to Brighton and good luck to all for next weekend's Championships. 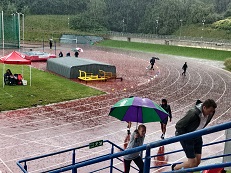 Dates For Your Diary from Mike Gent

Training at K2 starts at 7:30pm tomorrow (you should have let Malcolm know if you plan to attend) and there will also be a single session at Battlebridge at 7:00 pm.

After an absence of 18 months the MABAC league events are starting up again next Tuesday 3rd August at 7:30 pm. It seems a long time since the last event hosted by us on 1st March 2020, little did we know what was going to happen!

What is MABAC? It is a league comprised of 10 Surrey based clubs (of which we are one) who host a series of monthly events from January until November (there is no event in February). These are all cross country events, mostly held on Sunday mornings in some  beautiful and often remote, parts of the Surrey countryside. As well as the senior race of just over 8 km (5 miles) there are also joggers’ and junior events of about 4 km (2.5 miles).
Although primarily aimed at club members who might not normally take part in league races, MABAC events always attract a number of quick runners and you will always find someone to compete with. I have never heard anyone say that they haven't enjoyed a MABAC race.

The details are as follows. The race starts promptly at 19:30 at Wimbledon Rugby Club. Unusually this year the entrance is via Preston Road (SW20 0SS), rather than Barham Rd. We will try to arrange some car shares from Reigate and Redhill and in the past we have had groups of people who have travelled together from Victoria and Waterloo after work.

To help with social distancing there will be three different starts with separate Men's and Ladies' starts and a separate start for anyone running the 1 lap race. From memory this starts on the rugby field, runs along by a stream before a long drag for two laps of the aptly named Gravelly Hill (it's actually more sand than gravel), the final mile back alongside the stream goes on forever and the race finishes along two sides of the rugby field.

Training next Tuesday will be limited to single session at Battlebridge at 7pm to encourage as many of you as possible to participate in the MABAC event.

I look forward to seeing as many of you there as possible. Please let me know if you have any questions.

I had a "senior moment" when composing last week's newsletter. I talked about the men's Surrey County Championship results without mentioning the ladies' results. This was a significant oversight as Ginevra Stoneley is now the Women's V45 Surrey Champion at the 10 mile distance (in fact she was the second fastest Surrey lady overall). I am sorry for being so dozy Ginevra.

If you fancy a competitive track mile Epsom and Ewell are hosting their annual Mad Miles Event on 26th August, entry is £5. Details and registration are here.

And now for something completely different...

As a change from running Linda Rodriguez took part in a Cross Channel relay last week. 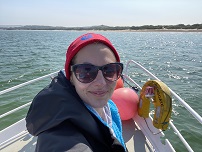 'Our seven-person team made it to France in 13 hours and 36 minutes. Our first swimmer -- Tessa Wardley (Poppy's Mum)-- set off from the beach at Dover at 8:54 pm, just after the sun went down. I was swimming fourth, so I got in the water from the boat at 11:54, under a big orange moon. The swimming was most definitely not the difficult part -- trying not to panic, in the dark, in the very cold, in a choppy sea, surrounded by jellyfish, and trying to keep up with the boat was. On the positive side, I was incredibly seasick in the boat -- couldn't keep a single thing, not even electrolyte drinks, down -- but I wasn't sick in the water! My second swim, at 6:54 in the morning, was absolutely glorious. The sun was up, I could see the horizon, and while it wasn't warm in the water exactly, I was fairly certain this time I wasn't going to drown and, even better, I could see the jellyfish before I felt them. My seasickness also eased after that swim, to the point that I was able to eat again (although all the Champagne we brought to celebrate remained corked).

We landed near Cap Gris Nez, but unfortunately, owing to Covid and border rules, only two of our team were able to actually swim ashore; the rest of us cheered from the boat. Then back to Dover! I went to bed that night saying, "I'm never doing that again" -- still feeling like I was on a boat -- and woke up the next morning asking, "When are we doing that again?" '

Linda was raising money for Mind and I'm sure she would welcome donations from club members.

Jim Vince completed the Jurassic Coast Challenge over the weekend - essentially completing a marathon a day over three days and climbing 2100ft in the course of covering the route from Charmouth to Shell Bay in Dorset. Fantastic achievement Jim! Most significantly this made up Jim's 97th, 98th and 99th races of marathon or more distance. Jim plans to complete his 100th Marathon on 21st August. This will be the Shere Trail Marathon, it would be good to get some other RPAC athletes involved to support Jim. There are 5km, 10Km and half marathon distances if you don't fancy doing the full distance (which includes 3000ft of climbing). 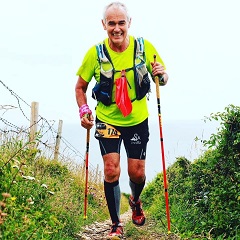 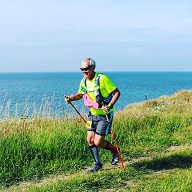 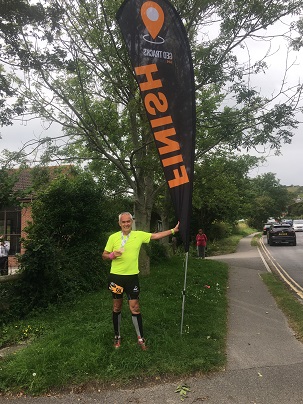 Kate Knight completed her 8th 100Km challenge yesterday - The South West Coast to Coast challenge which follows a 102km route from Minehead on the North Somerset coast to Dawlish on the South Devon coast. She reports that she arrived at the first rest stop shivering and in torrential rain but managed to warm up once the rain had stopped. This was Kate's 78th event of Marathon or more distance. Amazing as ever, Kate!

Andrew (Paddy) Patrick was the sole RPAC representative at the Surrey Slog yesterday (25th July). The Surrey Slog for the uninitiated is a trail half marathon around Holmbury Hill. It is run by MABAC as an open event and the course is described as "challenging but rewarding, hilly and undulating", I think Paddy would agree with that, particularly given the heavy rain during the early part of the race. Results have yet to be published but I am pretty certain that the race was won by  Andrew Reeves who is a second claim for RPAC. 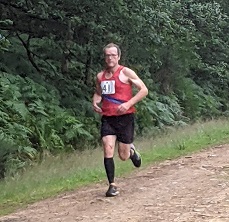 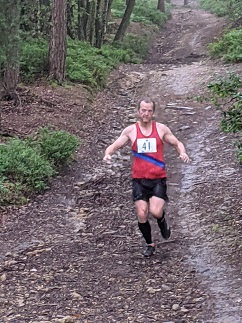 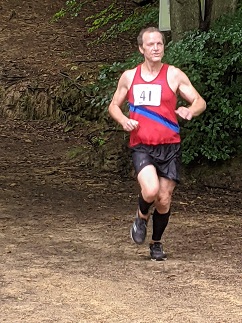 Please let us know if there is anything you'd like to see in the newsletter.